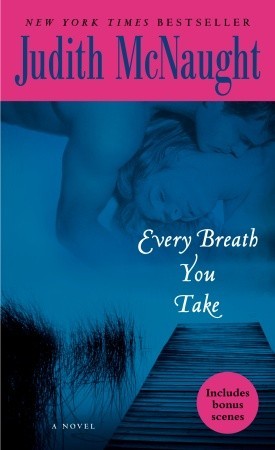 Every Breath You Take by Judith McNaught

Unforgettable characters, sizzling romance, and riveting suspense: These are the trademarks of beloved author Judith McNaught. With millions of devoted fans and ten New York Times bestsellers to date, McNaught is a writer whose work just gets better with each new novel–and Every Breath You Take is the book readers have been waiting for. Returning to the lavish Chicago setting of her popular novel Paradise, and revisiting some of that book’s characters as well, this story will captivate in inimitable Judith McNaught style.

High atop a snow-covered hill, the stately old Wyatt mansion is perched like a crown, its stone spires pointing upward, its stained glass windows glowing like colorful jewels. Such opulence means success and, surely, happiness. But on the eve of wealthy philanthropist Cecil Wyatt’s eightieth birthday, all the money in the world won’t bring back his missing grandson, William Wyatt. The only thing for certain: Foul play was involved.

The family, the police, the media–all have tried in vain to discover the young man’s fate. Now suspicion has turned shockingly toward William’s own half-brother, the rather distant and enigmatic Mitchell Wyatt.

Kate Donovan never dreamed that a chance romantic encounter on a tropical island paradise would tag her as a suspect in a high-society murder case. But after Kate tangles with the darkly charismatic Mitchell Wyatt, she finds herself cast in a shadow of guilt and mistrust. As the Chicago police tighten their net, it will take all of Kate’s ingenuity to clear her name. With her calm, cool wit, and the help of a man who may or may not be a dangerous catch, Kate vows to claim the life and love she desires.

This is the first romantic book I’ve read in awhile, and it lived up to my expectations. A complicated situation though,that at one point I wanted to grab both of them and say- HEY, WAKE UP!!!!!! 🙂

Quite a range of emotions in this one-actually, enough to think it’s pretty realistic. Sweet and tender. A love that is intoxicating. That leaves you breathless.

Just the kind of book that lets you escape from real life for a little bit!

Had a great day yesterday. So great that I forgot to post! And fell asleep at 8:00pm!!! Too much good!

Here I am with my crew with the exception of our daughter who was at her boyfriend’s house. That’s all I will say for now on that subject. 🙂

Hope everyone had a great Thanksgiving!

Yep! I bought 1 present today, and the rest was for me. 🙂

I didn’t mean to be so selfish, but (insert whine here) I really wanted some new curtains and pillows for my living room!

So here they are!

My 6th graders made a gratitude book this month with one for each day. Some of them were sweet and some were downright hilarious!

I had them pick a couple and put on sticky notes to create a wall of thanks in the hallway.

Here they are with their gratitude books:

And Emma went all out with hers!!

I’m thankful for my awesome bunch of students!

Today we practiced reading our picture books fluently to be prepared for our read alouds tomorrow.

This will wrap up our picture book challenge for the month of November.

My side of the family got together tonight for our Thanksgiving meal. We ate at Longhorn Steakhouse- this is 3rd year we’ve decided to eat out instead of at one of our homes.

It was a fun time as usual. So fun that we forgot to take a picture. Yep. Why do I seem to end up always forgetting???

So here’s a picture I took when I got home after doing some laundry. A friend had borrowed our tent paid me back with this:

I LOVE it! And it ended up matching my laundry room PERFECTLY!

So I asked her if she needed to borrow anything else!!!! 🙂

I’m now sitting here about to dive back into a mystery I started this morning. On the other hand, I’m trying to decide what online math site I want to use for my 6th graders to practice with. I’m wanting something common core aligned, visually appeasing, shows me progress, and easy to use and navigate.

I’ve heard about ten marks so I’ll be checking it out. Have thought about khan academy as well.

Any ideas or suggestions?

We only go to school 2 days this week and will be out for Thanksgiving Wednesday-Sunday. Yippee!! I’m looking forward to some down time!

I want to go shopping. Gasp! Did I just day that?? I’m not a shopper. But I want some new curtains and pillows for our living room!

Well, I guess that’s about all of the randomness you can stand for one post. 🙂

Have a great Monday!

Edutopia has some great articles, and I found one that talked about using good questions with your students that promote higher level thinking.

Here’s the graphic that was created by someone with the 5 questions.

I’m almost thinking that these are the only 5 questions I’ll ever need to ask again! Lol!

Here’s the link to the article.
http://www.edutopia.org/blog/five-powerful-questions-teachers-ask-students-rebecca-alber

Error: Twitter did not respond. Please wait a few minutes and refresh this page.